The Congressional Task Force on Financial Technology began aggressively exploring ways to combat the overwhelming discrepancy in venture capital funding for fintechs with white, male founders and those without them at its recent single-panel hearing featuring key industry stakeholders.

As such, the panel held a virtual event entitled “Combatting Tech Bro Culture: Understanding Obstacles to Investments in Diverse-Owned Fintechs” to parse through some of the operative questions surrounding that discrepancy. According to the task force, venture capital firms invested $35 billion in fintechs last year, but only 23% of those funds were directed to companies founded by individuals of color and even less, 2%, went to those with female founders.

Rep. Maxine Waters, a Democrat from California, and chairwoman of the House Committee on Financial Services, questioned why there is such a dearth of diversity in the fintech space considering how critical it is to the financial success of businesses and organizations.

“Research shows that companies led by diverse senior leadership outperform those that are led primarily by white and male leaders. And yet, venture capital funding for new fintech companies goes overwhelmingly to those founded by white men,’ Waters said. “In fact, only 2% of venture capital funding went to women founders, only 1% to Black founders, and only 1.8% to Latinx founders.”

Per the task force, the panel included input from five industry stakeholders who addressed core concerns surrounding the lack of diversity in fintech funding. Those panelists are:

“Venture capital can mean the difference between success and failure for a new fintech, and we can all benefit from promoting diversity in future fintech industry leaders,” Waters added. 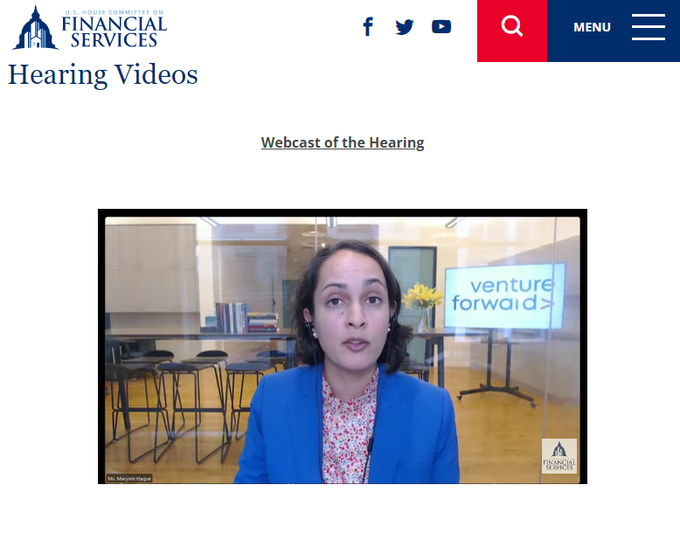 Abramson, whose Rethink Impact invests in female and non-binary led-firms, pointed to three reasons she believes money isn’t flowing to minority-owned entities. First, she pointed out those controlling the venture capital funds in the first place are largely men. Second, she said, she believes COVID-19 has exacerbated many existing issues with respect to venture funding. Lastly, she argued current economic conditions have also contributed to that gap.

“Getting more dollars in the hands of diverse fintech owners is not only critical to increasing financial inclusion in this country but it’s a great thing for consumers, investors, and our economy more broadly,” she said. “I started this testimony by sharing my Mom’s experience of fighting for women 25 years ago, and while the numbers have not improved on many fronts over the last few decades, I would like to believe that together, the people in this room can ensure that my own daughters are not sitting here in 25 years repeating this testimony.”

Watch the hearing in its entirety here.